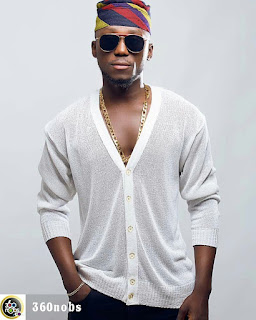 Yesterday Monday, July 17, 2017, 360nobs took to their Instagram account to celebrate Nigeria's top notch DJ, Producer and Songwriter, DJ Spinall, portraying him as their MCM (Man Crush Monday).Overtime, the Nigerian DJ has proven to be an authority in the world of Disc Jockeys. Here's what 360nobs has to say:

@Regrann from @360nobs -  Dj, Producer and. Songwriter @djspinall is our #mancrusmonday #mcm
Sodamola Oluseye Desmond is a DJ/Producer/Song Writer from Nigeria. He is popularly known as DJ Spinall a.k.a TheCAP. DJ Spinall is known for his fearless mixes on the decks, a feat that has differentiated him from many and won him recognition and several awards.

DJ Spinall created a distinctive look by adding a style edge known as TheCAP to his outfit. This move is aimed at showcasing his style adventure and also celebrating the African Prints.
DJ Spinall has released over 40 Mixtapes, including, A Journey with the Legend Jay Z, The Trinity Mix, 30Minutes To Get Funky, Headliners Party Mix, TheCAP House Mix and recently Afro Melody mix and Best Of Both Worlds – A Blend Of Nigerian & South African music.