Davido Reacts To Caroline Danjuma’s Accusation Of His Involvement In His Friend Tagbo’s Death. 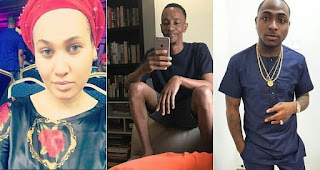 Yesterday, a news went viral involving the death of a young man, Tagbo and Davido’s unknown involvement in it.

He was called out by Caroline Danjuma is a now-deleted post on the gram.

She wrote; “Davido, where is Tagbo? He was with you and your crew last niht… You all wore face cap to hide you identities after he died in your car… You dumped him at general hospital and ran away.

The law must play it’s role this time…. You all better provide tabgbo alive… @Davidooficial

After you all abandoned him at general hospital, you continued grooving at DNA and had the nerves to promote your show. This ain’t no ordinary boy you can intimidate his family. We need you to tell us how he died in your car and why you ran away. The police and hospital have confirmed you all ran away. If you think your money can save you, you just met your match. Promise…” "

Well Davido has reacted to the news, he wrote; “People are just wicked. This is what I get for treating everyone like my brother.

I was deeply saddened to hear of the death of my friend Tagbo. 1st and foremost, my sincere condolences and prayers are with his family at this time.

I have been in the same position before and multiple times and also of recent.

But it is also dissapinting that false information and complete lies have been put out there using my name, as usual.

Out of total respect for Tagbo and his family, I will not discuss this matter further for now.