I was dating Tagbo before his death, but he wasn't the father of my last child - Caroline Danjuma . 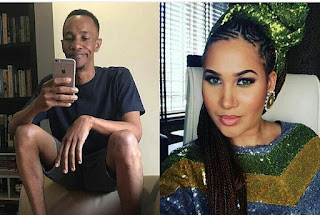 Actress Caroline Danjuma has come out to react to the viral claim that late Davido's friend, Tagbo, was the father of her last child. Reacting to the news in an interview with SDK, Caroline said: .
.
"I met Tagbo when i was legally divorced and out of My ex' house to start a new life. Yes we were dating. My daughter is 3 years old and I only met Tagbo last year, so its not possible that tagbo is the father of Elizabeth.
.
.
Let us leave sentiments aside, trying to blackmail me to keep quiet will not work or change anything. We need justice for Tagbo. I contacted someone who remembers seeing davido and tagbo at DNA and remembers there was a fight. .
.
This person also told me there was a bet, the same thing my neighbour said. And Tagbo drank 30 shots of tequila and got intoxicated and wanted to drive his car but Davido refused and said Tagbo should drive with him. .
.
That was what i heard and that they drove to G12 and got out leaving Tagbo in the car all locked up and that one of the crew members came back saw tagbo gasping for air.
.
.
He was taken to general hospital where he was confirmed dead and they left him there. I sent Davido personal messages but he didnt reply until i called him out on the social media and he told me to take down the post and he would tell me what happened. .
.
I took down the post and told him to come to the police station but he never showed up. Tagbos phone and shoes are missing and someone went on Tagbos IG and deleted all the videos he posted of being with davido on that day and eventually deleted the account. .
.
We quickly munched all the videos on snapchat. Tagbo was with Dammy Krane, Davido and Asa asika. Davido knew that Tagbo was dead but kept quiet. He told the Police later that he would have spoken out if i didnt call him out on the social media..can you imagine.
.
.
We want to know what happened and how tagbo died. Davido we are not calling you a killer but we need to know what happened to Tagbo. You owe him this because he loved you like a brother. He took you like a brother. Do it for him please.
Tags
Entertainment
Related Article