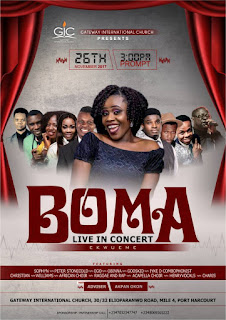 One Stage! One Goal! One Spirit! Different Talents and Graces! Port Harcourt Stand Up! Something good is about to hit the City like a Tsunami! Ladies and Gentlemen, I present to you, "Boma Live in Concert", an experience you wouldn't want to be told about— Better experienced than heard. Clear your schedules this Sunday, 26th of November, 2017 by 3pm. The graceful event would hold at Gateway International Church, 30/32 Elioparanwo road, Mile 4, Port Harcourt. Performing on the same stage are the likes of Adviser Comedian, Akpan Okon, Peter Stone Cold, Ego, Godskid, Sophyn, Iyke d Combophonist, Obinna, Christain, other side attractions/performance include: Reggae and Rap, Dance, Comedy and lots more!

DON'T BE TOLD, BE THERE! 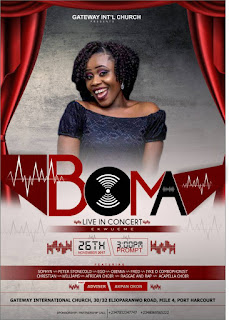 A BRIEF AUTOBIOGRAPHY ABOUT BOMA

My name is Boma Ngozi Echendu popularly known as Boma. I have always succeeded in redefining and reforming traditional urban Melody's creating a distinctive inspired proggression that has gotten every one explode in praising and worshiping God.

I started my career at Gateway International Church as a committed choir member and still devoted to that service it was during this act of dedication that the lead Pastor George izunwa sported me and released supernatural grace to excel upon my life.


My admirable and inspirational role models are Chienyere Udoma, Chioma Jesus, Sinach. I will also like to personally share the secret of my inspiration which is very important, all inspirations come from God almighty through his words that gives wisdom, knowledge and understanding to me when I seek him.


I released my first album titled chimoma in 2012 Where I feature Mercy chinwo in one of the track oletaram and a video was shoot for that song, the hand of God was upon that project which enables me to start performing on bigger platforms all through the country and African

My experience on bigger platforms has really help and motivated me to stand out, I have perform with the likes of frank Edward, Sammy okposu, Tim Godfrey, chioma Jesus, mercy chinwo and other big gospel artist on the same stage and event, but I still believe this is just my starting point.

God has brought me this far and still taking me on a journey of an expected end, for real, he can also do the same to you if you remain focus in him .