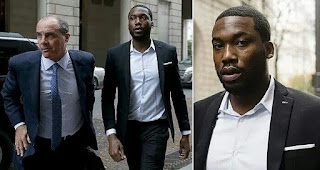 Ace rapper, Meek Mill appeared in a Philadelphia court on Monday where the judge sentenced him to 2-4 years in state prison for violating probation from his 2009 drug and weapons case, when he got arrested in a St. Louis airport for getting into a fight with an airport employee.

The judge also cited another probation violation when he got arrested for reckless driving in New York City. Even though both cases were dropped, the judge said getting arrested alone violated his probation.

Meek was immediately arrested while in court and remanded into custody.

It should be recalled that the rapper got off with a house arrest when he violated his probation in 2015, but the judge wasn’t so lenient yesterday
Tags
Entertainment
Related Article