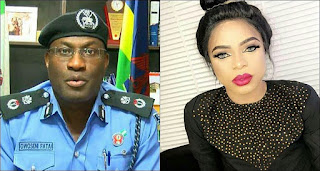 Commissioner of Police, Edgal Imohimi, has denied and distanced the command from the arrest of popular cross-dresser, Bobrisky.

According to him, no report was made against Bobrisky.

Edgal, who spoke with Punch’s correspondent on the telephone on Wednesday, said: “I don’t know about the arrest, and the command did not arrest him. He does not have any problem with the command. Ask him who arrested him.”
The Police Public Relations Officer for Zone 2 Command, Onikan, Lagos, SP Dolapo Badmos, also denied the arrest of the cross-dresser.” She said: “I am not aware of the arrest. Maybe he was arrested by somewhere else.”
There were reports on Wednesday that Bobrisky was arrested in his Lekki, Lagos home on Tuesday. And this happened days after he ‘admitted’ to being gay in a post which he later deleted.” After his arrest, Bobrisky revealed that business mogul, Toyin Lawani ordered his arrest. He said she accused him of stealing her customers.

It was gathered that Toyin Lawani asked her lawyer to write petitions against him, stating he worked for her and he is selling cream to all her customers.

Bobrisky said: “I never worked for Toyin. She was my friend. I can’t remember ever working for Toyin or learning how to make cream from her. “Then she also said I threatened her. So we are going to Abuja cause that was where the case was reported. Before she wrote petitions against me, she had already threatened me that she is giving me 7 days to go to the internet and apologize to her which I said no way because she offended me. I think because I refused to apologize, she got the police involved.” Bobrisky said his phones were taken from him and he was told he needed to wait till morning before travelling to Abuja as the case was first reported in Abuja. “Yesterday at the police station, I was sitting at the counter and I was told I needed to wait until morning to go to Abuja.
Tags
Entertainment
Related Article