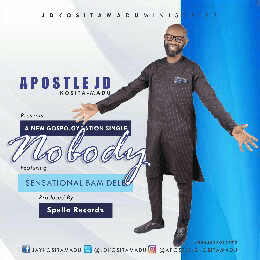 The year 2018 seems to be a promising one indeed as "Shine Shine Bobo" crooner makes a Grand come back into the Gospel Music Scene. Apostle JD Kosita-Madu popularly known by his former stage name, "Broda Jay" is out with an epic God-glorifying praise tune titled "Nobody". "Shine Bobo" which was his Hit debut single in timespast received a lot of accolades and air plays from Gospel greats, Radio stations, TV stations and is still sang as a praise song in some churches up till date.
However, over the years loyal fans and followers have long been anticipating another hit track from him. Glad to announce that the wait is finally over!


The song, "Nobody" featuring Sensational Bamidele is a Christian warfare and declaration song rendered in a Gospo-gyration genre. On being asked what inspired the song, here's what Apostle J has to say:

"During a miracle and healing service, the lord impressed upon my heart stronger than ever that no one can resist his work.
I started to sing the popular intro "who can battle with the lord" and I heard in my spirit, "dem never born that person", and the song was born.

Many people had been impressing upon me for years to do another song after "shineshine bobo" but I never really received the inspiration but from the moment I sang this song on the altar while ministering to the sick, I knew it was a message that had to leave the four walls of our church.

And that's how I went to the studio again. Incidentally, I have other songs I had kept in preparation for when I will eventually record again but this burned in my heart to do first."

Apostle JD Kosita-Madu is the Senior pastor of Trinity Worship Centre (Beautiful life community PH).
Ladies and Gentlemen, get your dancing shoes on and elevate your praise with this amazing tune produced by ace record label, "Spella Recordz".  Cheers!