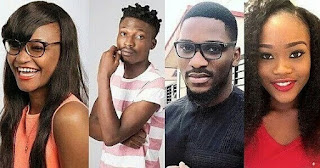 One can’t easily be unaware of the drama going on between BBNaija housemates, Tobi & Cee-C after the latter has repeatedly been curving advances made by Tobi in the house.

There have been many reactions to this by fans – particularly, Yoruba Demons, who are rather disappointed in Tobi who apparently isn’t portraying the attributes of a Yoruba Demon… they’re even at the verge of disowning him.
Once upon a time Big Brother Naija housemate, Marvis, too has reacted to the drama – this comes after Nigerian singer, Davido, took a swipe at Tobi on Twitter some hours ago – as she compares herself to Cee-C and says she never was this bad.

Marvis, whose love interest at the time, was with winner of the reality show, Efe, says she never manipulated him as Cee-C is doing to Tobi now – according to her, it just might be a strategy and if it is, she encourages it.
Tags
Entertainment
Related Article