Following the recent invasion of Ekiti state Government house by Security personnels from the FG, concerned Nigerians have come up to react online. One of such reactors is Prolific Comedian, I GO DYE. Ambassador Francis Agode who is popularly known by his stage name, I GO DYE and also a United Nations Ambassador, in an Instagram post this morning, reacted to the recent invasion in Ekiti state Government house. 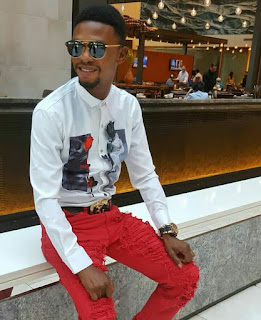 In his own words:

When pensioners protested this is what they got, when we protest for fuel pump hike this is what we get, when we protest against bad leadership this is what we get, when we protest on power failure or increase of minimum wage this is what we get. This  experience to you and it will serve as a lesson to others,that they  should join Nigerians when they face hardship and speak against it, because of corruption and the ills of  the political class.
Please get up, this is just a small thing compared to the injustice and pains that corruption have caused in this country. Oga governor,  you are still among those governor's that short  changed some of our youth's destiny, even the president is not exempted from any of such consequences. until  all of us  use our respective positions to promote what is right, every citizen of this country can face this kind of situation.
However,I condemn this action because it violates the  fundamental human right to liberty and I also use this medium to admonish the people of Ekiti State to remain peaceful as they chose who leads them on Saturday.
what happens  to the boys on the street, can happen to anyone. speak up, because our present status doesn't stop us from questioning our environment. Amb Francis 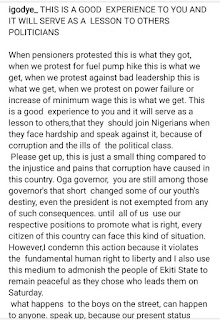