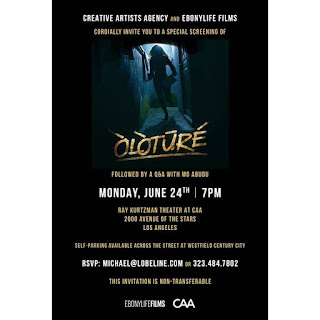 
In her post on social media earlier today, CEO of EbonyLife Films, Nigeria, Mo Abudu announced that the EbonyLife Films in partnership with The Creative Artists Agency will be hosting a private screening of the movie, Oloture in Los Angeles on 24th June, 2019.

It’s such an honour for us at EbonyLife Films to host a private screening of Òlòtūré in Los Angeles in partnership with The Creative Artists Agency on the 24th June 2019. I am so proud of the incredible team that made this project possible. Thank you all so much🙏🏾. A Kenneth Gyang film - Òlòtūré is such an important story to tell. Set in Lagos, Òlòtūré is the story of a young, naïve Nigerian journalist who goes undercover to expose the shady underworld of human trafficking. It will be coming to a cinema near you soon. #OlotureTheMovie
Tags
Entertainment Events
Related Article