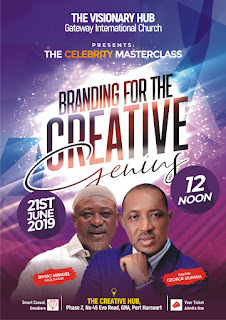 THE LEGENDARY ACTOR- BIMBO MANUEL IS COMING TO THE VISIONARY HUB, GATEWAY CHURCH!!!!

Bimbo Manuel is one of the most respected practitioners in the Nigerian entertainment space and has remained a relevant and preferred act in the more than forty years he has practiced in various sectors of the larger industry.

He had studied Basic Textile Technology before starting a career in broadcasting as a radio Duty Continuity Announcer/Newscaster/Late Show Host on OGBC and then on to the University of Port Harcourt to study Creative Arts, majoring in directing.
His filmography includes some of the biggest titles in the history of Nigerian television - Village Headmaster, SPACS, Ripples, Checkmate, Tinsel, The Governor, Castle and Castle and more than one hundred major films.

He has performed across the United States of America, Germany, France, UK and is a Culture Ambassador of The African International Center, Indianapolis, Indiana, USA which he consulted for over a period of seven years on African culture and audiovisual content during the Center’s annual Tastes of Africa Festival.

A respected columnist, screenwriter and playwright, ‘Alhaji’ a dramatic commentary on sexual dysfunction, is his latest work. His other works include ‘Interview With A Prostitute', '1960', a factional dramatization of Nigeria's march to independence, 'Kiki’s Dreams', an interrogation of the impact of sex on marriages in urban Nigeria, 'Esohe', a full length feature film released in January, 2018, for which he won an award at the Nollywood Traveling Festival in Toronto, 'Pasito Deinde', 'Kanyinsola' and several short films and playlets. He maintained a column, 'Random Notions', in the Saturday Independent and now writes an opinion page, ‘Chapters’ for The Crest, an online newspaper.

Bimbo Manuel remains one of the most active and relevant actors of his generation and a major player in Bolanle Austen-Peters' 'Wakaa The Musical' and 'Saro The Musical' and ‘Moremi’ The Musical’ theatrical phenomena, He was one half of the immensely popular morning show on LTV, 'BimboSolaConnect'.
He is married to Dr Mojisola Manuel, an early childhood education expert.

Calling all Creatives to quickly register and store your ticket on your phone.
Limited Slots available!
https://www.eventbrite.com/e/visionary-hub-the-celebrity-masterclass-branding-for-the-creative-genius-tickets-63422276737

ABOUT THE VISIONARY HUB

*The Vision of the Visionary Hub, of Gateway International Church* is to build rising stars into celebrities for Christ while flying the Gateway flag.

- seeking and selecting rising talents in various fields and industries

-Supporting and honing the talents into its best possible  form

-Projecting these talents unto the worlds stage

-Establishing them as more successful than secular counterparts.

To achieve this goal, we convene a Quarterly event called The Celebrity Masterclass where all rising stars are given an opportunity to mingle with celebrities and thereby expose them to forward thinking options of growing into celebrities.