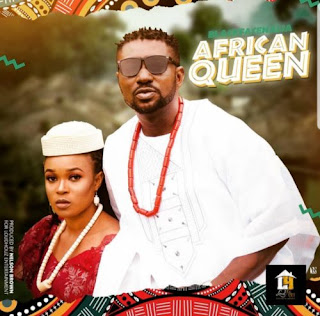 For a couple of years now, the feud between Ex- Plantashun Boiz singer, Blackface and his counterpart, 2face has been on the rise. This is owing to Blackface's claim that 2face's 2004 smash hit, ''African Queen'' was composed by him and that the song was stolen by 2baba. He also claimed that not only did he compose the song but he also came up with the tune, rhythm, melody lines and instrumentation of the song and that it was an act of betrayal for Mr. Idibia to release and claim a song that's not his.

However, in a recent music concert in Festac, Lagos, the Old time duo met on stage and called truce to their disagreement. While on stage, Blackface promised to stop haunting 2face and drop all allegations against him. Apparently, we don't know what to make of that anymore as to everyone’s greatest surprise, the singer announced the release of his own version of “African Queen” yesterday, 15 years after the team members banta thereby causing a major uproar on the internet and causing fans to ask questions.

Could it be that there's been an agreement between the duo for the Blackface to release his own version? No answer seems forthcoming, maybe not just yet. Meanwhile, we've provided the audio of Blackface’s “African Queen” version below, and it's reggae by the way and it sounds quite good. Well what do you think?
Download, Listen & Share your opinion